Members of the Executive Committee, consultants from Intellect and Acctech systems as well as the team members from the CBL brought to a halt an array of activities that characterize a normal order of the working day and descended into the Training Room for the launch of a Core Banking system on 16th January, 2017.

The Director of Information Communication and Technology Department, Mr. Sam Mahoana, said: “Today we are formally working from the new systems. We are no longer using MIDAS for any postings.” He announced that the launch would be marked by the Acting Governor, and Second Deputy Governor, Ms. 'Mathabo Makenete, who would also make the first acceptance or authorization of transactions.

Indeed, the Second Deputy Governor eased anxiety on everybody by processing the first transactions which were actually paid from the system. The big question was whether the payments had really been made. The confirmation was made by all who knew how the process worked. That moment of payment confirmation reflected on the screen ended the anxiety and brought much joy to those who worked on the project and everybody broke into celebration.

The Second Deputy Governor extended the heartfelt appreciation and thanked everyone for their contribution for bringing the project into fruition. She said “ We have gone a long way with our partners and project team led by management. It has been a long and hard road, marked by a lot of commitment and dedication of your time, a lot of backwards and forwards [movements to bring the desired end] in terms of what we wanted to get out the project.”

He pointed out that the implementation separated the Core Banking and Financial Systems. The implementation process was a collaboration between the Bank and the two major partners: Intellect – an Indian based company formerly known as Polaris which supplied the Core Banking system and Acctech Systems that supplied the Financial System. Mr. Sekoati showed that the product was called Sage 300. The Financial system would mainly be used for the Central Bank activities tracking and reporting.

MIDAS was implemented in 1990-1991 as the only computer system, supplied by MISYS. Regrettably, this company failed to cope with innovation in the computing environment and it became difficult for MIDAS to integrate with other systems. It reached state of antiquity and the Management made the decision to replace it and separate the core banking and financial systems. The need to replace MIDAS was confirmed by the external auditors –Deloitte.

The ICT Department started procurement process for the solution in September 2014 – May, 2015. PWC was appointed as the project implementation partner and the project started in July, 2015. The implementation process was undertaken through a number of phases. Firstly, functional specification requirement documentation and verification was undertaken. During this phase, the supplier and the users had extensive discussions to establish the needs that should be addressed with the solution.

The second phase was interface control documentation. This entailed the discussion around how the system will interface with other systems such as the Bloemberg, RGTS and Automated Clearing House etc.

According to Mr. Sekoati, the user Acceptance Testing helped to eliminate a lot of problems during the development process, making the system more stable in the end. He stated that during this phase there was an extensive engagement with the users to identify whether or not the system meet expectations.

Change management was another important factor considered during the implementation process. There was regular communication with relevant stakeholders to enhance an understanding of the change management processes throughout all the stages of the project.

As the system required high security integrity, PWC was involved to undertake security review and all systems were found to be appropriately set to meet security standards. There was a parallel run of the new and the old system from 28th November, 2016 to 13th January, 2017.

Mr. Sekoati indicated that "now the system is live, there shall be close monitoring to identify and rectify any emergent problems." He averred that the Bank has taken a leap-frog in banking technology. Although the full measurement and quantification of the benefits are not yet formerly done, the system has enabled better services that could not be done in the past. "One key benefit is that clients can now be able to have direct access into their accounts in real time", he said. 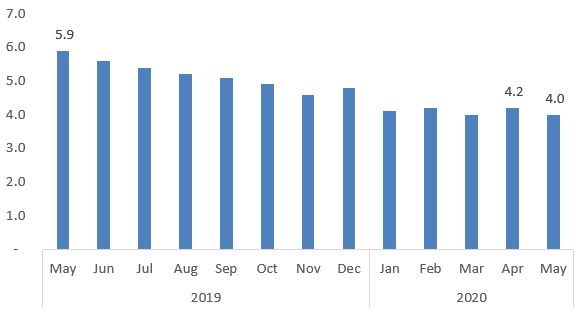